Project schedulers often receive Primavera P6 files in the native XER file format from different contractors and external collaborators for review, approval or to perform schedule updates in the database.

When an XER file is exported from the Primavera P6 software, all the data about a particular project, or group of projects is downloaded and saved to that file.

Along with the main project data, chunks of irrelevant proprietary data are often added onto the XER files, which is one of the main reasons why they can end up so big in terms of file size.

The larger and more complex the projects, the more information will be added to the XER file and the larger the file gets in size.

And the larger an XER file is in size, the longer it takes to be imported into another scheduler’s P6 database.

Once a scheduler receives a large-sized XER file from an external source and tries to import it in his P6 database, he is often forced to wait quite a while as the software is working in the background to import/read the file.

This process can sometimes even take up to several hours, depending on the volume of data in the file, which takes up from the schedulers time, that can be more productively spent on his other daily assignments.

The main reason behind the large size of XER project schedules, often lies in the Primavera P6 POBS data.

What is Primavera P6 POBS data?

POBS data represent a type of data category in the Primavera P6 XER schedule and database.

POBS add to the XER file size and are one of the main causes for bloated, size-heavy files and slow performance during the import/export of XERs from and to a P6 database.

This can be perceived as a particularly large problem when the file has thousands of records and the wait time for processing all the file data during the import process extends for long periods/hours.

The concept of POBS tables got introduced during early release of the Primavera P6 Professional versions, and since it can be argued that it has only brought inefficiencies in working with the program and communicating project data that schedulers are left to deal with.

POBS data only adds to the size and to the import load times and is often perceived to not provide any added value.

Official document schemes state that, POBS stands for Performing Organizational Breakdown Structure. While this data exists, functions related POBS tables have not been implemented yet, so the table has not been “put to use”. – source.

Hence, we can deduce that this data holds no particular use and value and can be removed without any negative consequences.

How to remove POBS tables from an XER file?

XER files in their essence are text files with tab delimited properties and rows full of data. Hence, there are several ways to deal with the issue of POBS data that reside inside them.

By explicitly removing the POBS data/tables from the source and destination databases, you will be able to export the file without this data to be added in the .xer file. This preventive action will also allow you to be able to upload the XER file in the “clean, POBS table free” database.

In contrast to the native P6 XER file format, P6 schedules in the XML file format do not transfer POBS data.

Therefore, by using the .xml schedule extension instead of the native .xer, you will not have to worry about any POBS data in the schedule and contaminating another P6 database with it.

However, XML schedule files exported from P6 are larger in size opposed to their XER counterparts and are followed with again, a lengthy and time-consuming upload process.

While POBS data can be removed from an existing file through manual edits of its structure, this can be a very time-consuming method, especially when there are thousands of records of activities in the schedule and is not recommended for less experienced schedulers.

Using this method carries the risk of removing other information from the XER file which are not unwanted as the POBS or RISKTYPE data and can often be a cause for a corrupted XER file, that can pollute a P6 database and cause a number of headaches.

To remove POBS data without any negative consequences, it is recommended to use special cleaning software tools such as ScheduleCleaner.

ScheduleCleaner allows schedulers to quickly clean POBS, Risks and Risktype, and more than 80 other categories of data from an XER project plan. 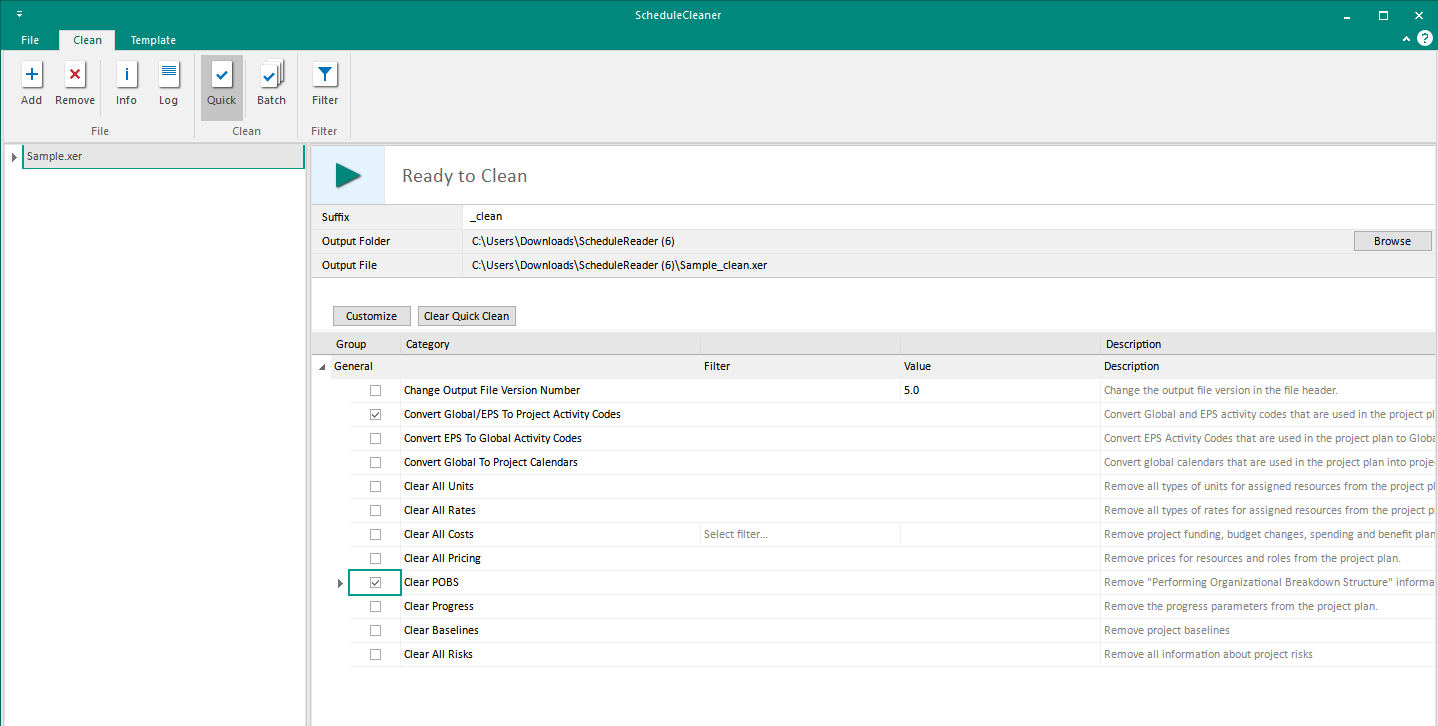 The process is simple and straightforward.

The application will then generate a copy of your file, free of all POBS data, next to your file on your PC’s location, leaving the original file unchanged and untampered with in the process.

ScheduleCleaner also features a “Batch Clean” feature, which allows the user to create a template with different modifying settings, which can then be applied to multiple files in one batch.

This useful feature allows users to automate the cleaning process and be able to clean a bunch of XERs at a moment’s notice, which introduces considerable time savings and makes scheduler’s job easier.

The same action can be performed to remove risks and risktype data from the project schedule, which is another big culprit that can cause a Primavera P6 database pollution.

By removing POBS data from the XER file, the file is notedly smaller in size, which leads to fast imports, time savings and operational excellence.

POBS data is category of project data that exists in the XER schedule and in the POBS tables in the P6 database.

While official documents state that, “functions related to table POBS have not been implemented yet, so the table has not been put to use.”, a conclusion can be made that POBS data exists with no particular purpose and for the time-being, only produces negative effects to the scheduler’s work.

Therefore, in most cases, it is recommended to safely discard it.

POBS data is added into the database during the import of external XERs.

The P6 database can accumulate POBS data in the POBS tables over time and with each future export, part of the POBS data can be added on the new XERs, that will eventually end up in and contaminate another database.

In this repeated cycle it may seems like these problems can never go away, however by removing the POBS data from the existing XER file before the import them to the database process, you can in fact solve your Primavera P6 POBS problems for good.

This will allow you to keep the POBS tables in your database empty, save time while working with XER files, avoid long hours of waiting for a file to be imported as well as avoid frequent monitoring or checking the POBS population in your database.

One of the best ways to perform action is to the use of special software solutions such as ScheduleCleaner which are easily accessible today.